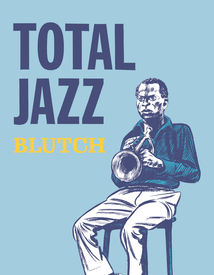 We were excited enough by this book's publication that we ordered it – from France – in it's original French language release (resulting in us charging more than twice as much as we are for this North American release!).  While, of course, there have been comics about jazz in the past – some of the best of which, intriguingly, have also originated in Europe – in Total Jazz, Blutch, comics master that he is, has done more than most to bring the spirit of jazz to its representation in comics form; working towards translating the jazz ethos of improvisation within formal compositions into the language of comics.  While many of the short pieces collected here are brief anecdotes with varying degrees of both sly and straightforward humor, there is a variability in their representational modes that, again, embodies the jazz spirit of experimentation and risk taking. Taken together as a whole, Total Jazz is a comics milestone.