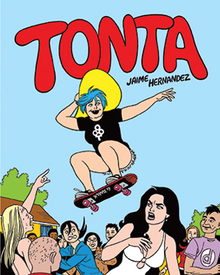 2019 has now provided us with an embarrassment of riches: two deluxe hardcover Jaime Hernandez collections in one year!  Here, a mere four months after Is This How You See Me?, we have Tonta, in all her glory (along with, of course, Viv and the rest of the clan).  Tonta is yet another character that beamed down into our world from the Perfect Sphere of True Comics via Hernandez Teleportation Services, Inc.  Debuting circa 2012 (see below*) in a walk-on role, she now has her name on the marquee of a hardcover graphic novel.  Who'd a thunk it?

Tonta was originally serialized in the pages of Love and Rockets: New Stories.  It is presented here in a larger, magazine size hardcover to enable readers and aficionados alike to better appreciate Jaime's amazing work.

HODLER: Is that how you usually create characters? It’s kind of accidental?

JAIME: Sometimes! Those happy accidents, so those will work out. Some of them don’t work out as well, but the ones that like, it turned out perfect … and I didn’t know.

HODLER: Do you think of a lot of background for them before you start the stories or does it just kind of come out as you write?

JAIME: I would say sometimes we plan them, right?

GILBERT: Yeah, not too far in, but just enough to get us going, and to build a story around, but a lot of times we just write. It took me 25 years to figure out who Fritz was, that’s why she’s in it all the time now, because I finally figured out who she is.

JAIME: And in Tonta’s case, I’ve just started with her. You know, I go, OK, she’s a teenager, with a goofy face, and then she’s Frogmouth’s sister. OK, we’ll see what’s gonna come out of this as I do her. Maybe she’ll fail. You know, maybe I won’t want to do her after a couple issues, but I’m hoping that I’m gonna run with her and even where she becomes a supporting character to others, but …

HODLER: I just read the issue yesterday. I like how even when you introduce a new character the story will read like it’s been going on for a long time, and just coming in it’s like, did I miss 12 stories about Tonta? [Laughter.] It’s kind of an interesting effect that gets created.

JAIME: Sometimes you start smack dab in the middle, and so, people feel they know her in a way or they want to know her. Sometimes you have a person walking up in the distance and that’s the beginning of that character’s story. It’s also editing. Tonta, I didn’t want to have her origin. [Laughs.]I just wanted you to see this big goofy face right away, BAM! Who is this girl? And then follow from there.

This item belongs to the categories: Collections, Copacetic Select, Graphic Novel
This item is part of the series: Love and Rockets
You may also enjoy these related titles: