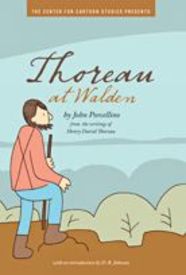 Thoreau & Porcellino:  a perfect match if there ever was one!  We have nothing but good things to say about this, the third volume in the Center of Cartoon Studies series of American Biography in Comics.  Printed in brown and black ink, this new hardcover book is a fantastic intro to the life and works of Henry David Thoreau and makes for a transporting read.  Porcellino had extracted the key quotes from Walden (along with a few from Civil Disobedience, for good measure) and then given them plenty of space to breath in the reader's mind, as the gently paced visuals flow across the page and work to capture the deliberate and gradual rhythms of Thoreau's day to day existence, which is to say real life, as it is lived:  the practical realization of his philosophy, in comics.

Here's what JP has to say about it:

"On Independence Day in 1845, the American philosopher Henry David Thoreau moved into a small cabin, built by his own hands, on the shore of Walden Pond outside Concord Massachusetts. He lived there for two years, two months and two days, and wrote a book about his experience called Walden, which has gone on to become one of the most influential philosophical works in the world.

Walden's message of self-reliance, self-reflection, social criticism, and harmony with nature have resonated with readers for over 150 years. Thoreau at Walden is an impression of Thoreau's time at the pond, with text taken directly from Thoreau's own published writings. Henry David Thoreau is one of my biggest inspirations as an artist and human being, so this project was very near and dear to my heart."

This item belongs to the categories: Gift Catalogue, History & Biography, Kid Friendly
You may also enjoy these related titles:

TOO TOUGH TO DIE: An Aging Punx Anthology