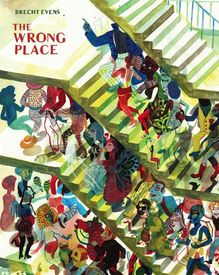 The Wrong Place
Brecht Evens
published by Drawn and Quarterly

This is a graphic novel where much of the meaning and significance is manifested in and through the artist's method.  Evens has developed a unique comics language involving the transparency of watercolor that you can get some idea of here, but only some, as the pages they chose for this preview only hint at what is to come in this dazzling 184 page work.  What you can see is that Evens's figures possess varying degrees of solidity and translucency, giving them at times a vaguely wraithlike appearance which works to embody and communicate his themes of urban ephemerality, revealing to his readers the flitting souls of his characters as much as their corporeality; or, if not souls, then perhaps the fleeting electro-chemical manifestations of personality interacting with those of other beings as well as their shared environments .  This is perhaps most effectively done in a central passage of sexual congress which employs his technique to its fullest extent and gives us yet another example of the inherent capacity of comics to convey aspects of experience that no other medium is capable of.  Recommended!  Now at a special price.

This item belongs to the categories: Graphic Novel, Copacetic Select, International
You may also enjoy these related titles:

The City of Belgium