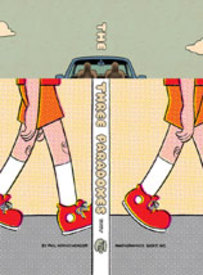 The work of Paul Hornschemeier is unique in that it employs the (re)production processes  as narrative signifiers.  In The Three Paradoxes, his most sophisticated work yet, he employs several different modes of production and reproduction to convey his epistemological concerns, chief among them how experience, imagination, and memories are each treated in different ways by human consciousness, ordered according to only dimly perceived criteria, and sorted into different categories.  Hornschemeier doesn't hold back here.  He reaches deep into his bag of tricks, brings it all out and throws it all down, creating a fascinating visual mix where we go from the blue pencil of imagination struggling to be organized to the flat dull colors of the day-to-day now to the bright Ben-Day dots of childhood memories which in turn connect the now and to the imaginary and then to a day dream and on to a Photoshopped recreation of the fundamentally problematic nature of a bit of pre-Socratic wisdom of the ages... and back again.  Yes, it does get a bit involved at times, and it does take some time for the design to become clear, but this work deserves to read it more than once and will reward any and all efforts on the part of the reader to wring out its meaning.  Highly recommended for those looking for a challenging, moving and entertaining read.

An intricate and complex autobiographical comic by one of the most talented and innovative young cartoonists today. The story begins with a story inside the story: the cartoon character Paul Hornschemeier is trying to finish a story called "Paul and the Magic Pencil." Paul has been granted a magical implement, a pencil, and is trying to figure out what exactly it can do. He isn't coming up with much, but then we zoom out of this story to the creator, Paul, whose father is about to go on a walk to turn off the lights in his law office in the center of the small town. Abandoning the comic strip temporarily, Paul leaves with his camera, in order to fulfill a promise to his girlfriend that he would take pictures of the places that affected him as a child.

As the walk with his father begins, and Paul starts to record the places of his childhood, the story leaps forward and backward through time, revolving around the events leading (and subsequent) to a beating near a funeral home in fifth grade. Amid these temporal bounces, we are taken from the law office to a convenience store to a debilitating car accident to the time of Zeno and the pre-Socratic philosophers, where we abruptly dissect Zeno and Parmenides' relationship and their refutation of the existence of change. Really. And with each step, Paul is trying to figure out how he will end his story, which he will finish when they return to the house of his youth.

Each "chapter" of the story is drawn in a completely different style, with strikingly unique production and color themes, and yet, somehow, despite (or perhaps because of) this non-linear progression, it all comes together as one story: a story questioning change, progress, and worth within the author's life.

Here'a a bonus look at the original planned cover: