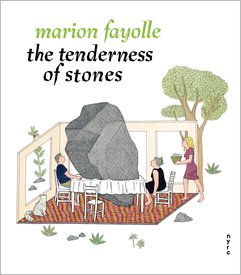 Originally published as La tendresse des pierres by Editions Magnani of France in 2013, Marion Fayolle's large format work has now been released here in the United States by New York Review Comics in a translation by Geoffrey Brock (that has been relettered by Dean Sudarsky).  The Tenderness of Stones is a comics meditation on coming to terms with the illness and death of a close family member, in this instance the father.

In harnessing both scale and locale to serve not only in the normative representational mode, but additionally in the metaphorical and figurative modes as well, Fayolle successfully leverages the inherent expressive capacities of comics to convey the heartfelt yet sometimes absurd processes of simultaneously dealing and coping with the illness and death of a loved one, in the process creating, in the words of NYRC, "a gorgeously drawn fable (offering) a vision of family, illness, and grief that is by turns playful and profound, literal an lyrical."