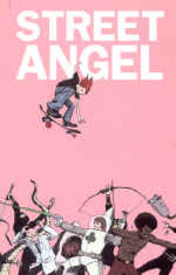 OK:  for those of you who have been putting off checking out Street Angel, one of the most original comic book series of the past few years, featuring breathtaking graphics and a trend-setting new character, and that was a surprise hit when it debuted in 2004 -- there's no reason to wait any longer.  And for those of you who are already fans, you'll be happy to learn that when it comes to Street Angel, this new TPB has everything and more: Street Angel issues 1 - 5; all Free Comic Book Day stories; an all-new 12-page Street Angel adventure; pinups from: Jeffrey Brown, Farel Dalrymple, Jesse Farrell, Richard Hahn, Dean Haspiel, Mike Hawthorne, Paul Hornshemeier, Dave Kiersh, Pat Lewis, Jasen Lex, Andy Macdonald, Jim Mahfood, Ted May, Scott Mills, Scott Morse, Bryan Lee O'Malley, Lark Pien, Ed Piskor, Brian Ralph, Zack Soto, Lauren Weinstein, and Dan Zettwoch; a spiffy Sketchbook section; and an introduction by Evan Dorkin.