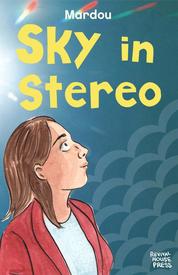 Sacha Mardou is a natural born comics storyteller.  Her pen & ink characters live and breath on the page.  The situations they find themselves in, their reactions to them, and the way it all plays out in the pages of her comics works have a verisimilitude that few other comics creators can match. The Sky in Stereo is her first foray into long form comics (i.e., a graphic novel).  She's been at work on it for a number of years (she and her husband, fellow comics maker, Ted May are also raising a child, who was an infant at the start of Sky in Stereo) and has released two of it's chapters as successful stand-alone comics.  Here in this iteration, we have a graphic-novel length work that weighs in at 180 pages, yet we are still only half way there, as the story is "to be concluded in Book 2."  The two stand-alone comics appear here as chapters two and three of this work, comprising just over half its length. The new work that appears here for the first time are the introduction and first chapter, which follow the protagonist, Iris from the time her mother is "born again" (courtesy some Jehovah's Witnesses) to the time which Iris drops out of the church, and the fourth chapter in which the lingering effects of the microdot that Iris ingested at the start of the third chapter make themselves felt.  Along the way, the reader experiences the streets, businesses and homes of Manchester, England (Mardou's hometown) through Iris's eyes, and almost feels the pavement beneath her feet.

For more perspective on this great work, check out the Copacetic reviews of the first and second issues.

This item belongs to the categories: Copacetic Select, Graphic Novel, Small Press Comics
You may also enjoy these related titles:

The Sky in Stereo