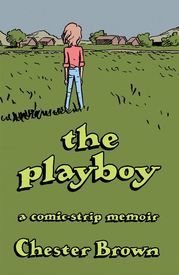 Back in print at last, this classic memoir of Chester's high school obsession with Playboy Magazine disabused Hugh Hefner of his notion that Playboy was just good clean fun - but only for the five minutes or so it took him to put it out of his mind.  Other, more engaged thinkers will hold onto this impression a bit longer.  It's hard for most to realize in this day and age when the high school memoir is a major staple of the comics  – or should we say, graphic novel – market, but when the comics that make up this volume, and its companion piece, I Never Liked You, were first serialized in the pages of Yummy Fur, they were like nothing anyone had ever read before.  Chester's acute perceptions of and brutal honesty about his adolescence surpassed that of even the master of confessional comics, R. Crumb.  The only true precursor to these works is Justin Green's seminal underground comix masterpiece, Binky Brown and the Virgin Mary.  Additionally, The Playboy now serves as an important prefatory volume to Chester's more widely read recent work, Paying for It, which deals with his decision to employ prostitutes for sexual gratification.  Reading these two works together reveals, among other things, linkages between the consumption of images the function of which is to objectify female sexuality and later difficulties with sexual intimacy.  Out of print for many years, The Playboy, which first appeared in 1990 in the pages of Yummy Fur #21-23, has now been reissued in a reformatted softcover to coincide with the release of the softcover edition of Paying for It.  This new release of The Playboy includes twenty pages of notes prepared especially for this edition.