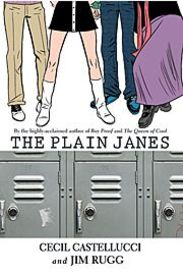 While we're on the subject of comics created by Copacetic customers, now's probably a good time to mention The Plain Janes. Written by young adult author, Cecil Castellucci (Boy Proof, The Queen of Cool), it is pencilled and inked in its entirety by Pittsburgh's own Jim Rugg, of Street Angel fame.This 176-page trade paperback edition is the opening salvo of the new Minx™ line of graphic novels. Published by DC comics and aimed at teenage readers, the Minx line is intended as a made-in-the-USA alternative to the  phenomenally successfull manga series published by Tokyo Pop and Viz."So, how does this rate as competition?" you may ask. Well, for starters, there's certainly quite a bit more going on in The Plain Janes than in your average Tokyo Pop production. It is a self-contained graphic novel, with a beginning, middle and end - unlike the majority of manga offerings aimed at this same market, which go on for as many volumes as the publishers feel they can get away with.Castellucci's plot is - relatively speaking - fairly complex, involving a big city girl, Jane, who has had a close call with an urban terrorist bomb attack and as a result now finds herself firmly ensconced in an alienating suburbia, hovered over by nervous parents, yearning to make new friends, and nostalgic for the funky aesthetics of her former urban environs. How Jane comes to terms with all this makes for the story, which is clearly and cogently drawn by Rugg, who has amply demonstrated his professionalism here.Being that this is the first offering of an entirely new line representing DC's entrance into a new market, there was sure to be a lot of pressure on him to toe the corporate line and deliver a product that the editor could convince the various departments to line up behind. Clearly, this was not a project on which Rugg could go all out and deliver the visual pyrotechnics that readers of Street Angel so enjoyed. However, the artwork on display here provides ample evidence that Rugg successfully met the challenges of his assignment, which was to create an informative, engaging and enjoyable visual representation of the story.If you have a teenage comics reader in your life, we recommend that you let them know about The Plain Janes.