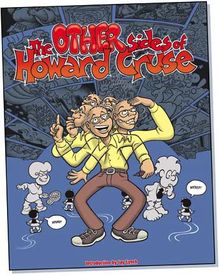 Howard Cruse, who passed away in 2019, was universally considered as one of the leading pioneers of gay comics, having founded the early underground comic book anthology series, Gay Comix, penned the ground-breaking graphic novel Stuck Rubber Baby, and produced the long-running Wendel series for The Advocate, but as with everything involved with personal identities and labels, there is more to being gay than just being gay.  The Other Sides of Howard Cruse is a full size, 224 page hardcover that provides a look at three decades (the '70s, '80s & '90s) worth of Howard Cruse's comics that are not specifically gay-themed.  The comics here – all in black & white, some with gray tones, and most long out of print – range far and wide, and taken together create a multi-faceted self-portrait of the artist.  The largest section of this collection – just shy of 100 pages – is devoted to collecting his long-running Barefootz series that originally appeared in a number of Alabama(!)-based publications.  These works took a variety of forms ranging from 1/2-page and full-page strips, to longer – up to ten pages – stories.  The collection is rounded out by a 100 + pages of Cruse's observations-in-comics of the world around him, ranging from thoughts on comics – notably Little Lulu and Tubby – to UFOs to tooth care and more; equal parts social observation, satire and silliness.