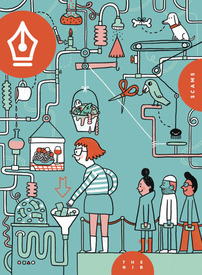 The fourth issue of The Nib's somewhat regularly published anthology of comics journalism (which we have been even less regularly getting in stock) focuses on a distinctly American art form:  The Scam.  While not unique to the USA, it is so firmly embedded in our society as to form part of the national character (enter Trump).  Here a large assembly of writiers, artists and cartoonists have gotten together to created a wide ranging look at this unfortunate national trait.  Much of what is covered here will be familiar to many readers, but there will be much that is new – and eye opening.  Forewarned is forearmed.  Don't get fooled again!

Matt Bors and Kazimir Lee illustrate how banks ripped off American homeowners, causing the massive 2008 foreclosure crisis that wiped out half of Black wealth in the country.

Yazan al-Saadi and Tracy Chahwan talk with refugees who are ripped off by smugglers as they flee for their lives from Syria.

Maria Stoian reports from within the multi-level marketing empire, attending a conference on shilling for essential oils.

Jamie Noguchi explains how a white Marvel editor using an Asian-sounding pen name is a form of literary yellowface.

James Kochalka and Eric Olsen reminisce about a failed counterfeiting scheme that hinged on just photocopying money at Kinkos.

Emi Gennis tells the tale of an old-timey huckster who amassed political power and wealth by selling goat testicles as a miracle cure.

Eleri Harris and Julia Bernhard get the scoop on how new agey fads promoting vaginal cleansing (yoni steam, anyone?) are all bad news.

Josh Carter, with artist Liz Enright, shares a personal story about the fallout on his family when his dad falls prey to one scam after another, including sending thousands of dollars to a “Nigerian prince.”

Maki Naro and Matt Bors team up to illustrates an interview with an evangelist of Flat Earth theory.

Artists Malaka Gharib, Katie Wheeler, and Ashley Robyn Franklin share scams they have personally been a part of.

This item belongs to the categories: Anthologies, Journalism & Travel
This item is part of the series: The Nib
You may also enjoy these related titles:

Be Gay, Do Comics! – Queer History, Memoir, and Satire from The Nib

The Nib #5: The Animals Issue