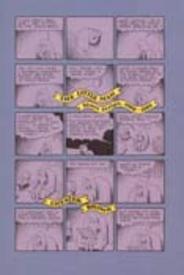 There’s no one quite like Chester Brown.  This is probably a good thing.  Nevertheless, he is one of the handful of certifiable masters to have worked in comics during the last two decades; and while Dave Sim can take rightful credit for being, along with his estranged former spouse, Deni Loubert, the progenitor of the modern comics movement in Canada, it is Chester Brown that is the single most important figure to have emerged out of this movement thus far and it is Brown’s work that has had and will continue to have the greatest impact on both his compatriots and the medium as a whole.

The Little Man is the best single-volume compendium of his work.  Collecting work spread out over the span of the first fifteen years of Brown’s career, this pert little book packs a hefty punch.  The bulk of the material is culled from Yummy Fur, the comics series which established Brown's reputation and with which he is still most closely associated in the comics world.  Brown is --  arguably -- a man possessed by a host of demons, each of his works an act of exorcism which serves to drag one of the pesky little suckers out into the light of day and by so exposing it to the glare of public scrutiny, shriveling its power over him, banishing it forever from his psyche.  It is even conceivable that, over the course of the fifteen years represented in The Little Man, he has succeeded in emptying himself and is free at last; and then again perhaps not.  Only time will tell.

Ranging in length from early one-page insanities like “Garbage Day” and “My Old Neighborhood” to the epic 55 page saga of “Helder” and “Showing ‘Helder’”, the material collected shows the many facets of Brown’s personality.  Free-association stream of consciousness rules the roost in works like “Walrus Blubber Sandwich” and the “Gourmets from Planet X”, while personal reflection is dominant in the aforementioned Helder-saga as well as “Danny’s Story”; and the two facets combine in the title story.  Personal reflection leads to personal revelation in the two pieces that close the collection.  “Knock Knock” uses only images to convey the transformative power of love, while “My Mother was a Schizophrenic” uses primarily text to make a cogent argument for the necessity of a reevaluation of the nature of schizophrenia, which as the title states and anyone who has read I Never Liked You (1994; D &Q) knows, is a subject that is of intense personal significance for Brown for obvious reasons.

Yummy Fur was notable for many reasons, not the least of which was, beginning with the fourth issue, its appending of graphic adaptations of passages from the New Testament--primarily (if not solely) the Gospels according to Mark and Matthew.  These adaptations functioned as back-ups to the main feature, but there were occasions when they took up the majority of the issue. “The Twin”, which is included here, was originally published elsewhere and is based on a gnostic tale of Christ’s early life. Possibly representing the onset of adolescence, it deals with a stage in Jesus's life that is barely touched upon in the New Testament (it is accompanied by a detailed exegesis in the notes).

Of all the pieces in the collection, the most powerful may very well be “A Late Night Snack.”  Perhaps revealing the dread at the core of the thought of a world without God, it is among the most haunting comics stories ever produced.

These two stories, "The Twin" and "A Late Night Snack", are, respectively, four and five pages long.  They provide ample testimony to both the power of expression and the economy of means that are made possible by the comics form when it is employed by a master.

A key distinguishing feature of comics as both a form and a medium is the level of intimacy it allows between artist and audience.  Few comics artists have been more honest in their intimacy than Brown has been in the work presented this book.

Now out of print.  We are on the lookout for copies, so don't hesitate to check back...

This item belongs to the categories: Copacetic Select, Collections
You may also enjoy these related titles: