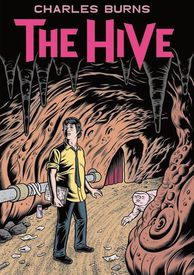 The hotly awaited sequel to the opus that began two years ago with X-ed Out is here!  Imagine TinTin growing up, moving to the east coast of the USA and evolving into a drug-taking, punk rock slacker with "issues" who then discovers a fantastic alternative reality and you'll have some – but only some – idea of what to expect between these covers.  All Charles Burns fans will rightly consider this volume filled with page after page of meticulously penciled and obsessively inked images architecturally arranged in sequences that pull the reader along on hallucinatory explorations of heretofore hidden recesses of the American popular unconscious a must; the uninitiated may enter at their own risk.