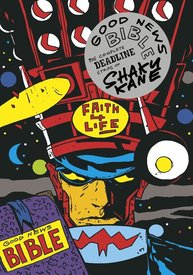 At last, the good news has arrived!

For the first time ever, Good News Bible: The Complete Deadline Strips of Shaky Kanecollects Shaky Kane's complete comic strips and illustrations from the ground-breaking British counter-culture magazine, Deadline, which between 1988 and 1995 spawned Jamie Hewlett's Tank Girl and launched dozens of cartoonists' careers.

Drenched in wry wit, Kane's politically charged, hallucinatory, Jack Kirby-infused punk cartoons crackle with intensity and bombast, remaining as relevant now as when they were first published 30 years ago.

Zone in, tune out and get ready to meet God's own cops: The A-Men, The Sadistic Prowler, Pinhead Aliens invading Russia, trans-dimensional subhuman entities The Shadowmen, Pagan P.I.: Wiccaman, Dannii Minouge, and the man of destiny himself: The Space Boss SHAKY KANE.

With an introduction from writer David Quantick, foreword from cartoonist and writer Nick Abadzis, afterword from cartoonist and comics academic Frank Santoro, and annotations from Shaky himself, this is the ultimate tome for baptising oneself in the perverse and psychedelic world of Britain's cosmic comics shaman... There is only one Shaky Kane.

This item belongs to the categories: Collections, Copacetic Select, Gift Catalogue
You may also enjoy these related titles: