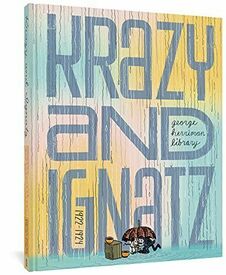 Here's the third in the ongoing series of giant-size – 11 1/2" x 14" – hardcover volumes collecting the work of one of the – if not the – greatest geniuses in the history of comics, George Herriman.  This time around we're treated to a bonus-sized volume of 50 extra pages!  Here in this volume's 228 pages are collected another three years of Krazy Kat Sunday pages – 1922, 1923 & 1924 – in the original black & white along with some amazing bonuses!  To wit:  10 full page and full color Saturday strips that originally ran from January through March 1922 (in addition to the standard full-page black & white Sunday strips appearing those same weeks – and, not only that, the editors have unearthed two different Sunday strips for January 29, 1922 and have run both here; Herriman, no slacker was he!).  These Saturday strips were an experiment on the part both of the Hearst syndicate and Herriman.  It was short lived, but presents a fascinating, rare early look at Krazy Kat in Kolor.  And that's just for starters!  We're also given front row seats to a heavily illustrated look at the "jazz pantomime" ballet of Krazy Kat, which premiered in NYC on January 20, 1922, with a score composed and arranged by John Alden Carpenter.  Then, lo and behold, the unearthing of (what, as of now, to the best of our knowledge, is) George Herriman's very first daily comicstrip, Mrs. Waitaminnit is laid beofre our eyes: 20 strips that ran daily from September 15 through October 13, 1903!  These revelations are accompanied by informative essays, once again by esteemed comics historian andcollector, Bill Blackbeard and Herriman biographer, Michael Tisserand.  Whew!

Everything on hand here has been reproduced with high deifintion files taken from the best available sources.

This item belongs to the categories: Classic Comics Collections, Newspaper Comics Strip Collections
This item is part of the series: Krazy & Ignatz
You may also enjoy these related titles: