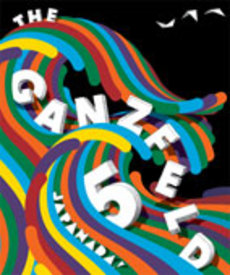 edited by Dan Nadel w/ Marc Bell & Yuki Minami You'll want to strap yourself in before cracking open the latest issue of The Ganzfeld, as the going gets going and doesn't stop until it's solid gone, and things get so far out you might wonder where it is you've gotten to.  Well, the answer, if you haven't already guessed, is, of course:  Japanada!  The artists featured in this issue all hail from either Japan or Canada -- hence the title -- and the end result could be seen as an imaginary island in the middle of the Pacific Ocean, but we'll assert here that it would be more accurately described as representing a heretofore unexplored province of the mind; more a state of mind than a place on a map.  This volume invites you to get away from the restrictive conformity of life in these United States and take a walk on the wild shores of Japanada where anything goes.  Here you'll find artistic risk taking the like of which you aren't likely to find between any other two covers.  You'll discover new and daring works by (from Japan): Saseo Ono, Shigeru Sugiura, Keiichi Tanaami, King Terry, Eye Yamatsuka, Misaki Kawui, Yuichi Yokoyama; (and from Canada) Julie Doucet, Bobo Boutin & Dominique Pétrin, "the All-Star Schnauzer Band", Tommy Lacroix, Amy Lockhart, Owen Plummer &  Andrew Dick, Scott Evans, Mark Connery and Shayne Ehman.  Each artist's work is prefaced by a short - or not so short -- essay to help get the reader up to speed and ready to confront the artistic frenzies of Japanada.

This item belongs to the categories: Anthologies, International
This item is part of the series: The Ganzfeld
You may also enjoy these related titles: