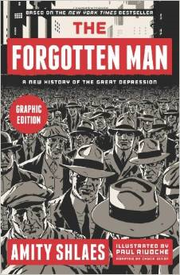 This work of graphic history is "based on the New York Times bestseller".  It has been adapted by Chuck Dixon and illustrated by Paul Rivoche.  Unless we've missed something, The Forgotten Man marks the single most significant comics work in the career of Mr. X co-creator, Paul Rivoche.  This Canadian artist has here turned in a great piece of comics work that makes for an informative and engaging read in providing some interesting aspects of the Great Depression as well as the years leading up to it.  However, it appears as though this work was intended as a polemic in support of a "new history" of this era that is supposed to overturn readers received notions related to this period in American – and world – history.  In this regard, The Forgotten Man makes for a fascinating look into the psychology of those embracing this revisionist view of history.  It appears as though the creators of this work take it as self-evident that readers of The Forgotten Man will come away from reading this with their eyes opened to the value and importance of this "new history" and will realize... something; it's hard to say what they were thinking.  The actual take away from this book is fairly different.   It is clear that the creators are partisans who identify with the "forgotten man" and have their differences with the policies that steered the USA through the depression.  They have put together an immense cast of characters and struggle to do their best to show how they are related, but while the characters themselves are well delineated, the construction of their relationships with each other and the overall flow of history are thoroughly muddled and superficial, at best, and reveal that the authors of this work possess a remarkably poor grasp of historical forces and processes, which together with a moral naiveté combine to create a disturbingly solipsistic world view that heartily embraces self-pity; unless, of course, this graphic edition was actually intended as a work of irony along the lines of Robert Altman's Nashville, in which case we say, bravo, well done!  Worthy of special note is Wendell Willkie masquerading as Dick Tracy (on page 210).  Given the graphic similarities of Chester Gould's star creation to caricatures of Ronald Reagan, this homage seemed especially apt.  Taken as a whole, the big plus is that there is enough ambiguity on hand here to make it possible for any comics reader to enjoy the classic old school comics story telling on hand here in this history of the era which, not coincidentally, gave birth to the comic book.