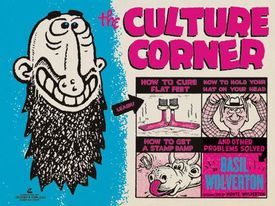 This 169-page, vertically formatted, full color hardcover volume is wacky and wonderful and Wolverton through and through.  Format fiends and practicing artists will relish this chance to see over 100 examples of a master working in the relatively rare half-page format.  Originally published in the pages of Whiz Comics (home of Captain Marvel) and several other Fawcett Comics titles, from 1944 through 1952, Culture Corner is a conceptual, idea-centered strip, that occupies a place in Wolverton's oeuvre that is analogous to that which "Hey, Look!" occupies in Kurtzman's.  And, also like Kurtzman's work, Wolverton's exerted a tremendous influence on the work of R. Crumb, which will be clear to anyone familiar with Crumb's work who gives this book a close reading.  The challenge was to repeatedly present a humorous concept month after month in a specifically ascribed format.  Culture Corner took modern manners as its taking off point and then gets going and gets goofy.  And it's all here – and then some!  Culture Corner not only collects the series in its entirety, but, offers up a truly amazing bonus feature of including the original pencil roughs for nearly every one of the published strips AND an incredible treasure trove of an additional 41 pencil roughs for strips that were rejected by the publisher (why?  who knows!  see if you can figure it out...).  Plus an introduction by Basil Wolverton's son, Monte that lays out the history of the strip and helps to puts it all in context  of Wolverton's career and comics history.  NOW ON SALE - WOTTA DEAL!

This item belongs to the categories: Classic Comics Collections, Collections
You may also enjoy these related titles:

Brain Bats of Venus: The Life and Comics of Basil Wolverton, Volume Two

The Horror! The Horror! â€“ Comic Books the Government Didn't Want You to Read!