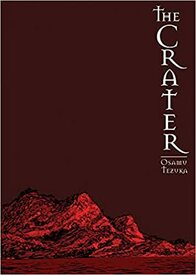 The Crater provides readers with a heaping helping of prime Tezuka.  Its 570 pages contain 18 classic Tezuka 30-pagers, 17 of which were produced for Shonen Champion and originally published between August 10, 1969 and April 1, 1970 – on roughly a bi-weekly schedule. This workload of 60 pages a month was on top of his simultaneous production of the graphic novel Apollo’s Song – and more! – as well as overseeing an animation studio.  While, as those familiar with the standard manga production system knows, Tezuka, like most if not all major mangaka, had studio assistants also working around the clock filling in blacks, ruling lines, completing backgrounds, lettering, etc., he nonetheless remained responsible for the writing and drawing all these stories.  No matter how you slice it, Tezuka, whose professional manga career ran 40 years, was a non-stop powerhouse of comics creation, likely producing more pages of published, professional comics than anyone in history.

The unifying formal quality that links the stories in this collection is their 30-page length combined with the constraint of the bi-weekly deadline.  By the time Tezuka created the works collected here, he had been creating manga for over twenty years and met hundreds of deadlines, producing thousands of pages of work n the process.  He had, by then, developed a deep understanding of visual storytelling, possessed  an intuitive grasp of narrative form, and had an inexhaustible supply of ideas.  Reading these stories, it becomes increasingly evident that Tezuka simply didn’t have the luxury of time to fully work up a story and then figure out how to break it down and tie it up nice and neat into the requisite 30 pages before hand.

Tezuka did his thinking in – and while – drawing; drawing was thinking, and thinking drawing.  When it was time to start in on the next story, he picked an idea, pulled out a fresh sheet of paper, grabbed a pencil, and started drawing, operating on his sharply honed instinct.  Occasionally, the pacing is slightly off and the story seems to come to end…. but is still a few pages short of the requisite 30, and so a kind of epilogue is appended.  Other times, it’s like the story needed to go on a few more pages, but, time’s up, and the story comes to an abrupt end.  But always, the thirty pages are filled with twists and turns and action in the service of fleshing out an amazing idea, along with a weird and/or wild concept.  The high pressure atmosphere under which Tezuka labored, forced by the demands of the market, bypassed the normal roadblocks of rationality and flushed out his unconscious drives from their hiding places in the id and ego,enabling his create genius to connect with previously uncharted areas.

Among the concepts on display here include a several that work through variations of we would now call “the multiverse”.  These employ ghosts, spirits, possession and more in the service of demonstrating the multiple possibilities that always lurk just below the surface.   Several of the tales take place in America –  as seen by Tezuka – including another morality play involving black/white race relations, this time in “the future” America of 1990.  One of the more intriguing tales is “Ochiro’s Strange Experience,” in which a high school boy is forced (by a devilish Jesus?) to share his consciousness with the spirit of a deceased high school girl who isn’t quite ready to go to heaven yet.  This leads to all sorts of gender confusion and role-playing, along with bathroom dilemmas, that are surprisingly contemporary in their substance, if still totally Tezuka in their form.  Then there’s the truly strange menàge a trois involving two race car driving roommates and… a mannequin, that seethes with a repressed and sublimated homo-eroticism.  “Bag Containing the Future” centers on a bizarre (and visually repulsive) concept that is only revealed to the initiated by their donning a pair of special glasses (a decade and a half before They Live) and that, in the process, confronts concepts of fate, destiny and free will.  And, with the tale, "Sergeant Akuno”, Tezuka produced a terse accounting of the profound cynicism at the heart of nationalistic, militaristic propaganda, which, Tezuka himself being very much an anti-militarist, he infuses with a strong dose of “what goes around, comes around” karmic retribution.

Tezuka originated so many powerful, raw concepts that have subsequently been mined and refined by countless creators working across all storytelling mediums that most culture consumers have already encountered them in their synthetic forms during the their reading of novels, short stories and comics, as well as cartoon and  movie watching.  Here, in the pages of The Crater, – a title which could be seen as representing the impact Tezuka has made in the cultural landscape –  is a great opportunity to experience the real thing.

Before signing off, we will here offer the caveat that Tezuka is very old school, and also that he dispenses will most formal niceties.  Always dynamically drawn, and packed with action – physical as well as psychological and even spiritual – his stories are often structurally formulaic; although we can testify that he keeps quite a few formulas under his beret!  Tezuka's confident employment of formula allows him to cram in a variety of variables into his  barebones narratives, and it is the exponential possibilities in combination that provide him in turn with the capacity to generate a graphic novel's worth of ideas into each short story.  Readers coming to Tezuka’s short form works for the first time may find themselves disoriented at first, but it’s most likely a matter of simply getting up to speed.

This item belongs to the categories: Collections, Copacetic Select, International
You may also enjoy these related titles: