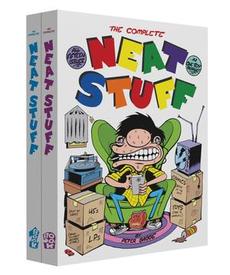 After the Hernandez brothers pioneered a new way of comics in Love and Rockets, and did so in the magazine format, their publisher, Fantagraphics, in the person of Gary Groth, made the decision to test the market established by the trailblazing comics of Love and Rockets, and led off with Peter Bagge's Neat Stuff.  In Neat Stuff's 15 black and white magazine size issues, which ran from 1985 through 1989, Bagge created, presented and established a host of characters, including Buddy and the rest of the Bradleys who went on to greater fame in the comic book series with which Bagge followed Neat Stuff, Hate.  While Bagge unquestionably matured and improved as a storyteller during the Hate years, it is in the pages of Neat Stuff that his art star shined most brightly.  Along with the Bradleys, Neat Stuff featured recurring characters Girly Girl & Chuckie-Boy, the reactionary talk radio host Studs Kirby, the hulking misfit Junior, suburbanites Chet and Bunny Leeway, the Goon on the Moon, and lounge lizard Zoove Groover.  There were additional forays into madcap zaniness in both form and content – and it's all here!  This two-volume, hardcover, slipcased set collects the entirety of Neat Stuff, including all the covers, which are printed in color, 488 pages in all!

This item belongs to the categories: Collections, Gift Catalogue, Graphic Novel
You may also enjoy these related titles:

Hate #1 through 26 all issues, all first prints 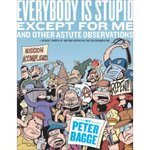 Everybody is Stupid Except For Me: And Other Astute Observations