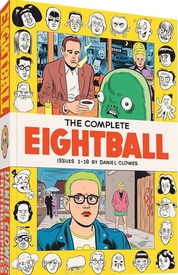 Yes, it's ALL here:  All eighteen* issues – in their entirety, covers, letters pages and all** – of the epochal, definitive single-creator anthology comic book series: Daniel Clowes's Eightball!   Everything is as it originally appeared, in black & white and/or full color.  Also included are the two short "Behind the Eightball" addendums that were prepared for the hardcover slipcased edition.

*Yes, of course, you are correct:  Eightball did indeed run for 23 issues, but, as you also know, these first 18 issues constitute the entirety of its "single-creator anthology comics book series" run.  #s 19-21 serialized David Boring, #22 was the original version of Ice Haven, and #23 contained Death Ray.

**And, yes, even the Modern Cartoonist insert is included.

This item belongs to the categories: Classic Comics Collections, Collections, Copacetic Select, Gift Catalogue, Graphic Novel
This item is part of the series: Eightball
You may also enjoy these related titles: