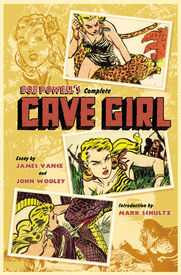 In his forward, Mark Schultz states that, “These stories, to me, read like a fevered dream.”  And, indeed, in comics as nowhere else, the unconscious can be – and is! – concisely revealed in all its glory.  In Cave Girl, we have a dream of white American males of the (pre-code) 1950s.  In these pages you will see  “woman” as simultaneously (paradoxically... or not?) desired sexual object and protective maternal figure - everything a man/boy desires.  You will also see the black/African man as simultaneously an object of ridicule and dread, presented as a figure both inherently inferior and terrifyingly threatening, which it is Cave Girl’s function to dominate, dispatch and deliver white man from the clutches of.  It is precisely this "dream" of American white men that was permanently punctured by R. Crumb (in his immortal tale, “White Man Meets Big Foot”, from Home Grown Funnies, ‘natch).  Of course, it takes great artistry to produce such transparent tales, and Bob Powell has what it takes.  These remain, both despite and because of all their revelations, great comics.  Aesthetically pleasing gripping reads that tell us what is going on in the American psyche of the 1950s that you won’t find anywhere else.  It is comics like Cave Girl - along with many others, of course, notably the EC line - that informed/nourished the child-selves of the generation that included the creators of Zap Comix (currently being lavishly celebrated in the deluxe-box-set-to-end-all-deluxe-box-sets) who exposed the repressed underside of the post-WW II America that nutured them in its pages and so gave America a chance to look at itself in the mirror of its own unconscious; not everyon chose to look, of course.  This hardcover book is, unfortunately, pretty gosh darn expensive, and based on it’s appearance, comes across as over-priced, but, once you stop and think about the fact that it contains the complete Cave Girl in full color – including all covers –, heretofore only available at astronomical prices, it seems like a bargain.  Includes a historical essay by comics scholars James Vance and John Wooley along with the aforementioned introduction by Mark "Xenoxoic Tales" Shultz.

This item belongs to the categories: Classic Comics Collections, Gift Catalogue
You may also enjoy these related titles: