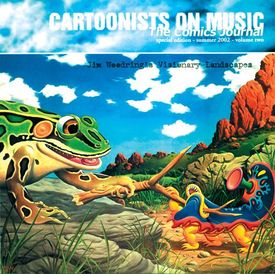 The Comics Journal Special Edition: Volume Two - Summer 2002
Bill Griffith, R. Crumb, Jaime Hernandez, Chris Ware
published by Fantagraphics
What's so great about this book that we're bothering to bring it to your attention despite the fact that it is over six years old?  Well, just for starters, it was the 2003 Harvey Award Winner for the Best Anthology. It's  180 pages in all.  The cover feature spotlight shines on master cartoonist Jim Woodring who turns in the fab cover painting you see here and who is the subject of two essays by Donald Phelps and Kenneth Smith respectively, as well as a new interview. Text-and-art features include an appreciation of the cartoonist W.E. Hill by Zippy creator Bill Griffith (with many examples of Hill's unique tabloid-sized Sunday pages in full color); "All Hail Jack Kent,"  an appreciation of King Aroo's creator written by indy comincs maven, Tom Devlin, that includes a rare look at the strip itself, in the form of a dozen full page, full color, high resolution scans of Sunday comics full-pagers; Timothy Kreider probes deeper into the cat cartoons of B. Kliban; an essay on French comics artist, Louis Trondheim by British comics critic, Paul Gravett; a bit of comics history by Robert Fiore wherein he explores "how Harvey Kurtzman and Al Capp succumbed to the 1960s;" and "Between Borders," a who's who in Mexican alternative graphic narrative, by Ernesto Priego.

And then there's the comics. Now, before we get into the star-studded comics section, it's important to note that this book is -- quite appropriately, considering its theme is music -- LP size:  Yes, that's right, these pages are a whopping 12" x 12"!  All the comics on display here were created especially for this format, giving the artists a chance not only to tackle a unique aspect ratio but also to stretch out in a signifigantly larger page size.  This means you get the chance not only to eyeball some special work, but that, because of the format, this work is, for the most part, unlikely to be reprinted.  There's a lot of nice work here by many of today's top cartoonists, working in both full color and B & W as they are wont to do. The entire spectrum of music is covered here, from classical to ragtime to jazz to rock to folk to punk to avant garde as well as children's music and general pieces on musicality, listening and more.   Hold onto your hats and check out the contributor list:  Gilbert Hernandez, Jaime Hernandez, Chris Ware, Michael Kupperman, James Sturm, Mary Fleener, P. Craig Russell (w/ Lovern Kindzierski), Penny Van Horn, Spain Rodriguez, Ron Regé, Jr., John Porcellino, Jordan Crane, David Collier, Peter Blegvad, Rick Geary, Rick Altergott, Johnny Ryan, Steven Weissman, Megan Kelso, Gerald Jablonski, Ted Jouflas, Roger Langridge, Tim Hensley, Justin Green, Mark Kalesniko, Carol Lay, Sam Henderson, Ho Che Anderson, Phoebe Gloeckner, Tony Millionaire, Frank Stack, Bill Griffith, Arnold Roth, Mark Martin, Ivan Brunetti, John Kerschbaum, Wilfred Santiago, Sherri Flenniken, Mack White, Carol Tyler, Victor Moscoso, and, yes, even R. Crumb, whose submission is an instant classic!

But, most amazing of all is the price, of this, our first Depression Buster Bargain™!
This item belongs to the categories: Special Sale, Anthologies
You may also enjoy these related titles: