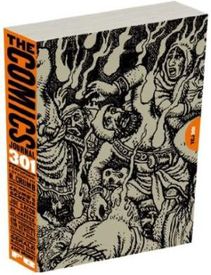 Two years in the making, this massive 624 page issue of the foremost periodical on all things comics is finally firmly ensconced here at Copacetic.   The lead off cover feature is an epic 170 page focus on R. Crumb's adaptation of the Book of Genesis that starts off with a 50 page interview with Crumb conducted by Gary Groth which is followed by a 120 page critical roundtable on the book by comics scholars Rick Marschall, Donald Phelps, Robert Stanley Martin, Jeet Heer, Tim Hodler, Alexander Theroux and Kenneth Smith.  Groth then moderates a lively 60 page conversation between Mad Magazine's legendary creator of the Fold-In® and Thrizzling® cartoonist Michael Kupperman, and later completes his trifecta of amazing interviews with an engrossing 50 page interview with Joe Sacco that focuses on his reportorial comics masterpiece, Footnotes in Gaza (which is also reviewed in this issue).  Chris Lanier writes on Brian Chippendale's Maggots, Warren Bernard alerts us to the large body of work created in the early 20th century by Chicago Tribune editorial cartoonist John T. McCutcheon, and Tim Krieder turns in what we will not have to go too far out on a limb to immediately declare to be what is now, surely, the definitive critical appreciation of Dave Sim's 300-issue masterwork, Cerebus.  On the art front, we have the complete Gerald McBoing Boing comics – 70 pages of full color comics lithely illustrated by UPA staffers in the early 1950s – as well as sketchbooks by Jim Woodring, Tim Hensley, and, surprisingly (bizarrely!), Stephen Dixon.  As this is the only issue of TCJ that will be available for all of 2011, we feel quite safe in saying, "If you read only one issue of The Comics Journal this year, this is the one!"

This item belongs to the categories: Journalism & Travel
This item is part of the series: The Comics Journal
You may also enjoy these related titles:

And Now, Sir – Is This Your Missing Gonad?