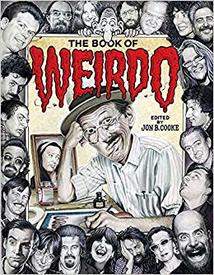 When Weirdo first premiered nearly 40 years ago ( > Good Lord, Choke! < ), it would have been hard to imagine it ever being the subject of a coffee table book, but times change!  Here we have a heavy duty, oversize, 288 page book chock full of photos, illustrations, and, of course, comics – entirely in black & white, natch' – edited, and largely written, by comics scholar Jon B. Cooke, with plenty of help from Weirdo alumni. In addition to covering the life and times of the magazine and its contributors – most notably, and centrally, R. Crumb – there are plenty of interesting asides to tangential issues such as Weirdo's connection to the Church of the Sub-Genius, its link to the creation of the Comic Book Legal Defense Fund. the influence of Bruce Duncan's Tele-TImes, and much more!

This item belongs to the categories: History & Biography
You may also enjoy these related titles:

R. Crumb: From the Underground to Genesis

Heroes of the Comics