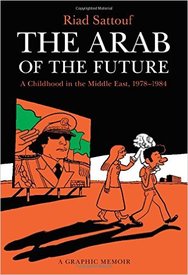 This book made a big splash in France, where it was initially published, becoming a #1 best seller.  It has subsequently gone on to be translated into sixteen languages, including Englsh, and now is belatedly making its North American debut in this attractively produced, French-flapped (naturellement!) edition, with 160 interior pages printed on a nice flat, off-white paper stock which is well suited to the judicious duo-tone color scheme that supports Sattouf's cleanly delineated, highly expressive cartooning.  The tale is a memoir of his early childhood years spent in Libya under Gaddafi and Syria under Assad, Sr., as well as rural France, and it is expertly told.  Anyone interested in learning more about the quotidian life in the middle east, specificallly the environment in which children are raised, will find much to chew on here.  It will not take too much cogitative connecting of the dots to extend the up close and personal portrayal here and get a larger picture of the deep cultural roots of the problems facing this part of the world.  The likes of Alison Bechdel ("This is a beautiful, funny, and important graphic memoir."), Michel Hazanavicius ("The Arab of the Future is one of those books that transcend their form to become a literary masterpiece." [What, comics masterpiece somehow not good enough?! - ed.]), and Gene Luen Yang, who says it best ("The Arab of the Future is a beautifully cartooned story that is both modern and timeless.  The protagonist is one of the most endearing in comics. An important book, not just as art but as a window into another culture.").  In addition to having the potential to appeal to fans of these creators works, The Arab of the Future stands a good chance of being both appreciated by readers of Marjane Satrapi, Guy Delisle, Joe Sacco, and anyone else who is intrigued by the prospect of experiencing alien cultures on comics form.  This volume will provide North American readers with some serious perspective on their own lives.

This item belongs to the categories: Gift Catalogue, Graphic Novel, History & Biography, International
You may also enjoy these related titles:

The Arab of the Future 4

The Arab of the Future 3

The Arab of the Future 2