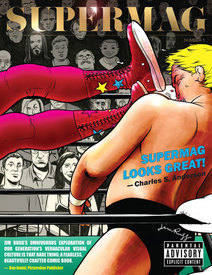 Supermag is a 56 page full color (with some black & white, where called for) magazine, saddle-stapled to a heavy duty glossy cardstock wraparound cover.  It boldly sports endorsement quotes on the front cover as well as back – by a wide-ranging mix including an art director, a publisher, a comics artist and a couple of designers, that points to the equally wide-ranging variety of works contained therein – in such a way that their appearance is organically incorporated into the cover's design in the manner in which readers normally expect to see a magazine's contents displayed.  This bold assertion of the work's quality in place of the normative listing of its contents brings to mind Norman Mailer's landmark collection, Advertisements for Myself, which, like Supermag, is a miscellany showing off the author's creative strengths, also published at a similar point in his career.   Supermag contains comics, illustrations, poster and cover reproductions which taken together demonstrate a startling mastery of styles and skill sets.  The majority of the work has been previously published in books, magazines and comics ranging from micro small press to mega mainstream media.  There are several never-before-published works included as well making this a must for even those rabid Rugg completists who have managed to get their hands on the rest.  There's something for everyone here, and for some, everything.

This item belongs to the categories: Collections, Copacetic Select, Made in Pittsburgh
You may also enjoy these related titles: