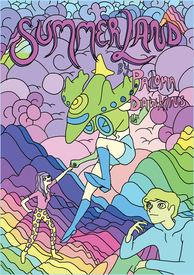 Summerland is a unique piece of comics work, one which turns the typical creative hierarchy on its head, with the coloring in the dominant position, followed by the inking, then pencilling, and with the scripting tacked on almost an afterthought.  The boldly inked lines are minimal yet effective in delineating the scene, and to brace the colors and let them do their stuff, and what they do here is something new.  In the pages of Summerland, Ms. Dawkins has improvised an innovative approach to color, one in which she "plays" the color scheme using tone clusters and chords, rather than the normative approach of hitting single notes and then combining them, and she does so to great harmonic effect.  It is difficult to describe the sensation that viewing these pages makes other than to say there is an immediate impression of being surrounded by color.  The tonal proxomity of the wall-to-wall colors vibrate the optic nerves in ways that will serve to shatter more than one preconception about comics coloring.  We recommend that readers simply let go of their narrative processors and immerse themselves in absorbing this comic book, so as to savor the optical experience.  Here, in Summerland it's the story that's the background.

This item belongs to the categories: Small Press Comics, Copacetic Select
This item is part of the series: Retrofit Comics
Search Copacetic
Just in:
See all recent arrivals...
Copacetica
Edifiying essays about all things Copacetic