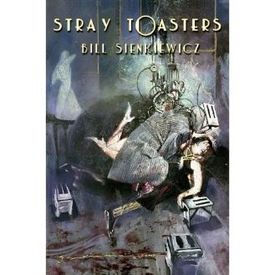 Back in print at last!  This collects the entirety of the four issue series, originally published by Epic Comics, that turned mainstream comics on its ear when it was originally published nearly twenty years ago.  Following on the heels of his ground-breaking work on Elektra Assassin and Daredevil: Love and War, both written by Frank Miller and both of which were critically as well as commercially successful, Sienkiewicz was given carte blanche for a solo project and Stray Toasters was the result.  Realizing that this was a once in a lifetime opportunity, he really cut loose and pulled out all the stops.  Using his own psyche as a test subject, Sienkiewicz bore deep inside the comic book mind set, and used his massive technical abilities to bring to light what he found there.  He pushed himself to the limit on this project, and, evidently, emptied himself in the process as, while his work occasionally graces a project here or there, he all but retired from comics after completing this landmark work.  Containing a startlingly diverse panoply of formal approaches that mirror the works of so many different artists -- from the far-flung reaches of the worlds of comics, cartoons, illustration and fine art -- that an annotated edition seems called for (anyone out there up for the task?).  Stray Toasters was and remains a hugely influential work (David Mack's entire career consists, more or less, of mining this single work) and still packs a wallop, even today.   All self-respecting students of the history of comics owe it to themselves to at least take a look at this one.  Recommended!