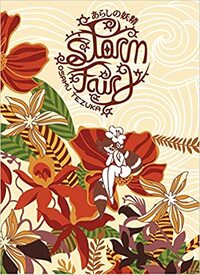 Storm Fairy is a collection of three shojo manga tales that Tezuka penned in 1957.  The first and lengthiest, coming in at just under a hundred pages, is the titular "Storm Fairy" which is a samurai-era romance.  The next feature leaps into the (then) present with "Kokeshi Detective Agency", which is actually a strung together series of short stories featuring Pako, a precocious – and fearless – third-grader and her older, but fearful, brother Taro.  Each short story solves a mystery, wIth Pako always in the lead – and sometimes by herself.  It's a bit like a darker, more action-packed version of the Little Lulu and Tubbie stories by John Stanley that were coming out in the USA at the same time, but each with as much plot as a Hardy Boys novel crammed into a mere seven pages!  The third and final tale is a major league mash-up.  "Pink Angel" is also actually a series of shorts each featuring the titular character (who is actually the human embodiment of a cloud spirit, more or less) which provides a mix of pretty much every kind of manga: a princess, tough guys, fairy tale magic, big business, talking animals, crime, romance, espionage, an artist's garret, jet fighters... you name it.  Tezuka!