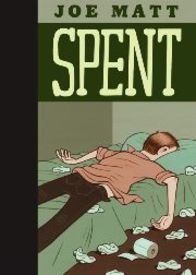 Here it is, the grande finalé to Matt's Canadian chronicles.  A US citizen who lived (illegally) in Canada from 1988 to 2002, Matt, along with Seth and Chester Brown formed the quintessential Canadian indy comics troika.  Matt's shtick is one of horrifying self-criticism, in which he mercilessly (and, we have to admit, courageously) parades his flaws and quirks for all to see.  In his own  twisted way, Matt's parade manages to float the (well, more than) occasional celebration of degeneracy -- perhaps most fully and disgracefully here in Spent, in which, as the title suggests, he made what we can all hope was an at last successful attempt to get it all out of his system.  Only time will tell if it did the trick, but we can enjoy the perverse pleasures of this comics text now and that everything will work out for him in the end.

Stuck in the Middle: Seventeen Comics from an Unpleasant Age