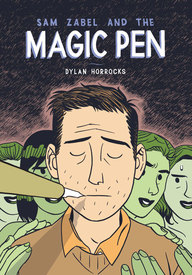 Many years in the making, this long awaited work is Horrocks’s first graphic novel since his epochal Hicksville, published way back in 1998.  Sam Zabel is more or less Horrocks’s pen & ink alter ego, and The Magic Pen is, at its core, a roman á clef in comics, but, intriguingly, a roman á clef that is primarily concerned with the author’s fantasy life as lived through the consumption and creation of comics.  As such, this work manages to cleverly function as both an escapist fantasy and a meta-comics commentary on the nature of this fantasy and the role which comics play.  This is, of course, far from the first time that comics have been employed to comment on fantasy as a key component of the life of the mind.  One can make an argument that it has been a central pillar in the edifice of comics since day one, beginning with Winsor McCay’s demonstration of comics’ ideal suitability for conveying dream and fantasy in Little Nemo in Slumberland (and Dreams of Rarebit Fiend, as well), which marked the dawning of the comics era.  The originality embodied in The Magic Pen lies in Horrocks bringing this tradition successfully into the age of the graphic novel.  There is a hint of Dante’s Divine Comedy here; instead of wise Virgil leading Dante through the realms of Christian theology as informed by classical Greco-Roman philosophy, we have sexy manga/anime girl, Miki guiding Sam through the fantastic realms of comics  – the historical as well as the creative processes that brought it into being through pen and ink on paper (which, given New Zealand’s relative proximity to Japan, both seems appropriate and adds another layer of significance).  That the relationship(s) between the  sexes and the nature and boundaries of gender are keys to most if not all fantasy – at least of the variety that makes its way into comics – is amply on display here, as repressed, oppressed and otherwise frustrated sexual energies are clearly sublimated in the the rituals and activities that take place in the comics fantasies of The King of Mars and The Queen of Venus which are the inner core of this work, created by the “magic pen” of the title, which here conflates the the pen’s symbolic value as a phallus with that of a metaphor for creativity (as in “the pen is mightier than the sword”).  This magic pen both brings sexual fantasies to life and redeems the creator by doing so.  Horrocks also cleverly integrates the act of collecting comics in such a way as to demonstrate the key role played by the comics collector/dealer ecosystem in the maintaining and transmitting comics history.  This works especially well here in that Zabel, as Horrocks, is a New Zealander, and the history of New Zealand comics is relatively uncharted territory compared to that of the US, and certainly far less familiar to readers here.  So, while the generic conventions on display will be familiar to most readers, it is easier to imagine the possibility of there being undiscovered comics in far off New Zealand.  And, of course, there is the comics work itself.  The art Horrocks has produced here is the finely crafted work of someone who has been honing their craft for twenty plus years.  Not only is it uniformly fine throughout, it is also his first full color work of any significance, and while he acknowledges some “generous colouring help” from some peers, the coloring is perfectly suited for the work and belies Horrocks’s relative inexperience in this area.  This is a graphic novel.  You can dive right in now with this PDF Preview.

This item belongs to the categories: Graphic Novel, Gift Catalogue, International
You may also enjoy these related titles: