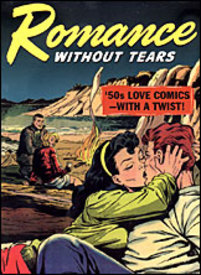 Romance Without Tears
stories by Dana Dutch
art by Matt Baker & Co.
compiled and with an introduction by John Benson

Talk about long overdue!  This book presents -- for the first time since their original appearences over fifty years ago -- a selection of some great but sadly overlooked comics from the post-WWII era.  Originally published in the late 1940s and early 1950s, these comics are the real romance comics. The stories in this volume were (at least, according to Benson) penned by one Dana Dutch, an almost completely unknown author about whom the only thing we can say for sure is that he sure knew how to tell a good story.  The art is, for the most part, executed by one of the all time greats of comics, Matt Baker.  Better known for his sultry super heroines like the  Phantom Lady, his best work is here in the Romance (and Crime) comics published by the St. John Co.  These are comics that tell engaging stories about people whose actions have discernable motivations and who make decisions that they are then forced to live with. Totally forgotten by all but a few die-hards is the fact that the women in these early romance comics were very much the agents of their own destiny; certainly when compared to their counterparts in the later romance comics whom, during the genre's long uninterrupted slide into oblivion that ran from the late 1950s through to its ignominious end in the early to mid '70s, gradually became a self-parody of their former selves, metamorphosizing into mindless automatons who sighed and cried their way to the altar.  Sadly, it it is these later comics that are normally conjured up when one hears the term "romance comics."  This is due, in large part, to specific images from these later, genre-in-decline (i.e., decadent) comics being given iconic status by their being reproduced in the paintings of pop artist, Roy Lichtenstein.  But it is the comics that are presented here in Romance Without Tears, that are the true Romance Comics. These are the comics that now need to be remembered and reevaluated so that they may reenergize the comics of today!
160 pages; full color (except for one story); squarebound; 8 1/2" x 11"

This item belongs to the categories: Classic Comics Collections, History & Biography, Collections
You may also enjoy these related titles:

Matt Baker: The Art of Glamor

Sheena: Queen of the Jungle