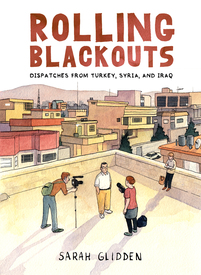 This work's sub-title, "Dispatches from Turkey, Syria and Iraq" provides readers with a straighforward idea of what to expect:  comics journalism from a part of the world that occupies a disproportionately large space in the news.  And, yes, you will find this here in this volume's 300 pages of ink drawn and watercolored comics, but this is more than just "news" as the comics here delve into the Iraq war and its consequences in a series of one-on-one interactions that enable readers to gain an up close and personal appreciation for a multiplicity of perspectives on what is so often presented as a faceless conflict in far away lands.  An additional level is provided in that the narratives are simultaneously interwoven with the story behind the story, the travels of the artist and writer with her group of friends, who are engaged in pursuits of their own, a detailing of the situations in which the news was gathered, a demonstrating that all news has a subjective and personal aspect. Rolling Blackouts is an engaging read that demonstrates the strengths of comics journalism and which readers will come away from more knowledgeable about the human reality behind the conflicts than they arrived.

How To Understand Israel in 60 Days or Less