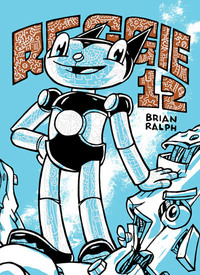 The first thing the reader notices upon picking up this sprightly, oversize hardcover volume, is the nearly translucent embossing representing the innards of Reggie 12 (innards which, intriguingly, from an interpretive standpoint, extend into the book's title logo; indicating, what?:  that the word and image are consubstantial? that, as consumer good, the title logo and the visual representation of the [imaginary] titular character are equally undergirded by their artistic rendering?  Points worth pondering...), a clever maneuver that leads the reader to pause contemplatively before diving in to swim through the cover-to-cover black and white and sky-blue comics.  The roughly two dozen pieces that make up this collection embody an energetic cartoon synthesis of Felix the Cat and Astro Boy (sort of).  While one-pagers predominate – many of which originally in Giant Robot Magazine – the pieces range in length through two, four and six pages, all the way up to an eight page origin sequence.  These include new (at least to us) stories which all flow together with the old, making for a relatively seamless reading experience.  Power-packed fun for all ages, from a founding member of Fort Thunder, who can currently be found teaching at SCAD.

This item belongs to the categories: Collections, Gift Catalogue, Kid Friendly
You may also enjoy these related titles: