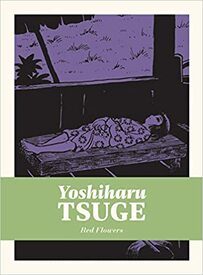 It took a minute to finally get here, but Red Flowers has at last arrived!  The dozen works that comprise this 278 page hardcover volume – the second in Drawn & Quarterly's ongoing series collectiing Tsuge's work –  were all originally published between April 1967 and June 1968.  So, while R. Crumb & Co. were pioneering a new, "underground" form of comics in the USA, Tsuge Yoshiharu & Co. were blazing a comparably important and influential new, "literary" way of manga in Japan.  As Mitsuhiro Asakawa and Ryan Holmberg state in the opening lines of their 28 page, in-depth essay that accompanies this volume, "It is no exaggeration to say that (this) volume... contains some of the most important works in Japanese comics history – nay, in Japanese cultural history.  It represents the beginnings of what we might call 'literary manga'."

Get ready to dig in! (Can't wait?  Read a nice high-resolution excerpt, HERE.)

The Sky Is Blue with a Single Cloud

The Man Without Talent

The Pits of Hell