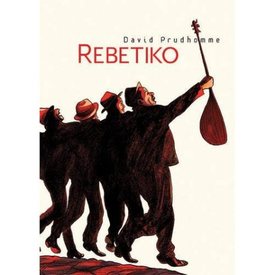 In 1930s Greece, the country was governed by a military dictatorship and the musical counter culture was made up of rebellious rebitis who loved to smoke hash, drink ouzo, beat each other up, dance, sing, and, most of all, play a music known as rebetiko (aka the Greek blues) on their bouzoukis.  While these cocks of the walk seemed fond of making an impression on the ladies, they seem most of all interested in each other here in this delicately rendered full color graphic novel that was also originally published in France in 2009.