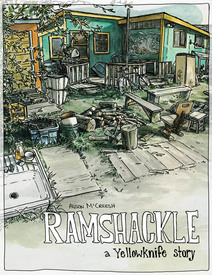 Take a comics journey to the Northwest Territory of Canada, with Alison McCreesh as your guide.  Conundrum sez:

"Over the past decade, the North, or at least the idea of it, has slowly made its way back to our consciousness, a notion that the North is synonymous with a lawless, rugged freedom. But at first glance Yellowknife, NWT is actually a somewhat disappointing modern capital city. There are tall buildings, yoga pants, a Walmart and a lot of government jobs. None the less, if you dig a little deeper, you do find that alternative off-grid reality. Barely five minutes from the downtown core, wedged between million dollar houses, you find little shacks where people exist without running water and use honey buckets for toilets.

When Alison McCreesh moved from Quebec to Yellowknife she quickly fell in love with the quirky ways in which it seemed possible to live up North. Part travelogue, part comic book, part love story and part guide to the North and its quirky inhabitants Ramshackle spans her first summer north of 60."