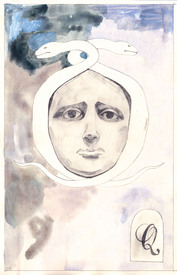 In Q, Aidan Koch appears to approach comics in a manner that may be informed by Frank Santoro's efforts to span the centuries and connect comics with the west's most enduring archetypes, most notably in his 2005 newspaper comics, Chimera and his dreamscape, Incanto (perhaps with an implicit nod to Thomas Pynchon's V?).  Q can profitably be viewed as an experimental comics translation of the mythic symbols of classical antiquity.  By employing what is by the standards of comics a massive "canvas" – 15" x 22", which yields a 30" x 22" centerspread – Koch is able to open up the space of the visual field in a way that few comics have.  This allows for an unusual degree of majesty to inhere in the images presented, which are arrayed in a fashion that both suggests the decaying architecture of antiquity and posits the comics page as a potential heir.  Q calls imagination and memory to the fore and allows/demands the reader (re)construct a mythic presence of their own.  <<•>>  Limited to 1000 copies, 8 pages, 15" x 22" , full color 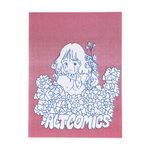