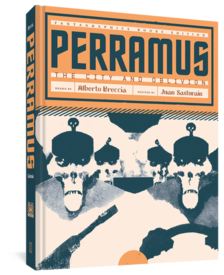 This massive tome (no joke, it weighs in at over two kilos) collects the entirety the Perramus saga.  The backdrop for this work is the violently suppressive dictatorship that traumatized Argentina beginning in 1976 (supported by the US via the CIA and justified as "fighting communism", just FYI), and infamous for "disappearing" over 30,000 Argentinian citizens.   Inititated by Breccia contacting Susterain in 1982, in the waning days of the dictatorship.  Perrmas: The City and Oblivion is informed by the horrors then only recently experienced – by Argentina in particular, but also by Breccia's native Uruguay, which, along with Bolivia, Brazil, Chile and Paraguay, also experienced (US supported) dictatorships during roughly this same period.  These were dark times in South America.

Appropriately, this work borrows some structural elements from Dante's Divine Comedy, which starts off in hell.  The classical Roman poet, Virgil's role as guide through hell is here, in Perramus, taken by Argentina's greatest writer, Jorge Luis Borges, who died in 1986.  Given the highly political nature of this material, it was originally created for European publication; initially serialized in installments, usually running eight-pages, and subsequently collected in four graphic (bande dessinée) albums – all of which are collected here in their entirety, along with plenty of bonus material.

Breccia's black and white art is executed in a fluidly brushed ink wash that (comics nerd alert) combines the vivacity of Jack Davis and the expertly drafted caricature of Mort Drucker with the finesse of Alex Niño's brush work.   Take a moment to scroll down through a massive preview, HERE!