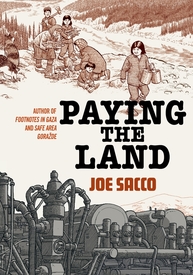 YES!  Here at The Copacetic Comics Company, we are very excited to have a new full length work by Joe Sacco here in the shop.  Paying the Land is Sacco's report back from his time spent in visiting with The Dene people, an indigenous group of First Nations who have inhabited – "since time immemorial" – the lands that make up what is currently referred to as the Mackenzie River Valley in the Canadian Northwest Territories; millenia before Europeans, Canadians, or Americans ever laid eyes upon them.  As usual, Sacco reports primarily directly from the source, telling the stories of overlapping generations of members of the various tribes and bands that make up The Dene, among whom number hunters, fishers, trappers, chiefs, entrepreneurs, activists, political representatives and more.  There are the stories of individual lives, the people's history, and at the center of it all, the collisions with Western Civilization, which takes many forms.  While these collisions are clearly embodied in the form of extractive industries intent on plundering for profit the very land that, in the eyes of the Dene, "owns them, not the other way around,”  Paying the Land reveals that the deeper impacts have taken place in the minds, bodies and souls of The Dene, as they experienced the trauma of having their traditional ways of life taken away from them and replaced by the education, religion and social norms of the west.  Today, these traumas are shown to be at the core of their struggles to regain their rightful agency over their lands, and, ultimately, their lives.  As always, Sacco's approach to graphic storytelling fully immerses the reader in the unfolding saga from page one, while simultaneously embedding critical and emotional registers throughout the narrative with his sophisticated understanding of pacing, layout, juxtaposition and scale.  In other words, this is a finely crafted work by an experienced practitioner of the comics form.

We direct anyone looking for more details to Aida Edemariam's thoughtful (and somewhat combative) review at The Guardian.

Need further convincing? Then take a moment to check out this very generous preview (click on right-pointing arrow on menu bar at top center to advance through preview).  You'll be glad you did!

The Great War: An Illustrated Panorama

Days of Destruction Days of Revolt