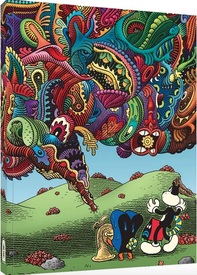 One Beautiful Spring Day is an oversize, heavy duty paperback, with a translucent vellum jacket (which has been removed in the image on left, so as to reveal the splendor of the underlying image).  Yes, that sounds great, but, you may ask, Is it a reprint collection?  Is it new?  The answer is… it’s both!  It collects the three most recently published volumes of the Frank Universe™ — Congress of the Animals, Fran, and Poochytown  — plus 100 new pages by Woodring that serve to weave these three volumes into a single cohesive artistic entity.  And, yes, as with all other works in the Frank Universe, it is stunningly rendered in black and white and entirely wordless.  Yes, it’s another Woodring masterpiece!

For those of you who have already purchased the original hardcover editions of Congress of the Animals, Fran, and Poochytown  and are on a budget, we feel your pain, BUT we can also let you know that copies of Congress of the Animals now routinely sell on eBay for around the price of this compendium, so, anyone so inclined could fund their purchase of this volume with the sale of that one (although, it’s certainly possible that demand – and so prices – for Congress of the Animals will now drop as a result of the release of this compendium, but only time will tell on that).
This item belongs to the categories: Collections, Gift Catalogue, Graphic Novel
You may also enjoy these related titles:

And Now, Sir – Is This Your Missing Gonad?

Frank in the 3rd Dimension