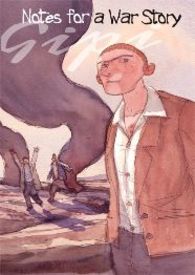 What a study in contrasts we have in the latest pair of releases from that fast rising star of graphic novel publishing, (:01) First Second.  On the one hand we have Notes for a War Story, a harshly realistic and remorselessly grim account of youthful thuggery and stupidity, which, coming on the heels of Garage Band being released in English for the first time earlier this year, has us thinking of Gipi as the premier comics deconstructor  of contemporary European youth (and likely had others thinking along similar lines as it was awarded the 2005 Goscinny prize for best script and was provlaimed book of the year at at Angouleme in 2006); while, on the other, we have Sara Varon's Robot Dreams, a fantastic and whimsical account of a friendship between a robot and a dog.  What could be more different?  Confrontation or escape...  which is the best approach to deal with these trying times?  Well, from the looks of things, there's no need to choose.  Both are equally valid on their own terms, as these two timely works more than adequately express.

They Found the Car (Wish You Were Here) #2