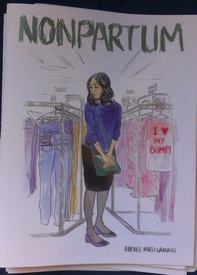 This 20 page, full color, magazine-size comic book is the first print edition of an ongoing work.  Non Partum is a multi-layered investigation in comics form that touches on many aspects of life but is centered on pregnancy in a way that reflects how a woman's life can also be so centered.  It  is part memoir, part sociological study, part cultural critique; all intellgently approached, skillfully explored, absorbingly told and beautifully rendered.   Non Partum is currently being serialzed on Mutha Magazine.  A theme running through the episode presented here - which originally appeared as "The Subject" - is overcoming the inherent frustration of dealing with the often poorly designed, rule bound systems - and their occasionally less than thoughtful representatives - that govern our interactions with the institutions which we all must deal with in order to prevail.  This edition sports a new, original cover and a bonus pin-up page of the 40 weeks of pregnancy as represented by appropriately scaled herbs, grains, legumes, vegetables and fruits, both creaed specifically for this edition!

This item belongs to the categories: Handmade, Made in Pittsburgh, Small Press Comics
You may also enjoy these related titles: