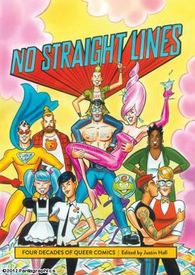 
edited by Justin Hall
This 300+ page survey represents the most substantial collection of this burgeoning branch of comics to date.  Starting off with a concise, eight page introduction providing some background and history (and noting his decision to include only comics from "the Western world", pleading the vastness of queer manga), editor Justin Hall then proceeds to provide a chronological celebration of LGBTQ comics that covers a wide swath of the work done under this banner, beginning with proto-gay cartoons by Joe Johnson and  ranging from pioneering early efforts by Trina Robbins, Roberta Gregory, Lee Marrs, Joyce Farmer, through post-AIDS-era – but by no means AIDS-centric, the opposite in fact – strips by newbies and veterans including Howard Cruse, Tim Barela, David Wojnarowicz, Jerry Mills, Jennifer Camper, Dianne DiMassa, Alison Bechdel, Craig Bostick, and up to the 21st century with works by Joey Alison Sayers, Edie Fake, Maurice Vellekoop, Ellen Forney, Ariel Schrag, Tim Fish, Eric Shanower, Carrie McNinch, as well as editor Justin Hall himself – who is an accomplished and widely published comics practitioner himself – and many, many others.  No Straight Lines covers all the bases.  ADDED BONUS: the first five copies sold will include a signed and numbered customized bookplate by Justin Hall indicating the book's being purchased from Copacetic Comics; this bookplate is inserted loose into the book and may be affixed or otherwise used (as a bookmark?) however the purchaser deems fit.

Theater of Terror: Revenge of the Queers!