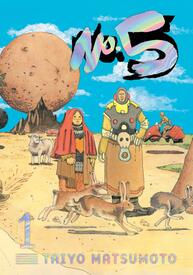 Finally, the entirety of Taiyo Matsumoto's eight-volume saga, No. 5, will be collected – in four, 300+ page, double-size volumes – in English (translated by Matsumoto's longtime American collaborator, Michael Arias) for the first time!  Originally published in Japan a full twenty years ago, No. 5 is an intriguing and intoxicating amalgam of Matsuoto's international influences, notable among them Moebius, Otomo and Hugo Pratt.  No. 5 is Matsumoto's most daring and experimental work, and readers will have to stay focused to keep up with all the twists and turns.  Those who do will receive ample rewards for their pains, as this series is filled with dazzling artwork as Matsumoto shows off his incredible artistic range.

For those long-time Matsumoto fans who were lucky enough to get their hands on the two volumes published by Viz in 2002-3 – which was as far as it went at that time – please note that this first volume collects those two volumes (along with a new super-wraparound-French-flapped cover and fold out poster).  The following three volumes – which will be released at three-month intervals through April of 2022 – will entirely consist of work appearing in English for the first time.

No. 5 is an epic science fiction / fantasy adventure set in a topsy-turvy world of Matsumoto's own devising where everything looks and feels simultaneously familiar and alien.  So, settle in, buckle up and get ready for some fantastic comics/manga!

Cats of the Louvre