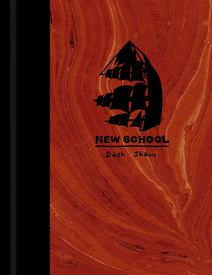 Anyone who has been meaning to check out Dash Shaw's mysteriously meandering meditation on the Americanization of reality, now has an opportunity to take the plunge for a fraction of the original cost, as it is now ON SALE – Cheap!

Here's what we had to say about it upon it's publication in April 2013:

New School coheres around an unwieldy amalgamation of Shaw’s formative influences, including, but not limited to: the strongly visual language of manga and anime – especially Tezuka – where more of both plot and character are revealed through images, less through words, than is the norm in Western comics; his studies at SVA, especially with David Mazzucchelli; his collaborations with Frank Santoro and John Cameron Mitchell.  This gives it a rough hewn feel, which is further accentuated by the plain, no frills production choices which Dash, as the book's designer, made in presenting this work to the public.

Of special significance to the new school is Shaw’s successful appropriation of German artist, Sigmar Polke’s boldly expressive combinations of color fields, patterns and photographs overlaid with black line cartooning – often of recognizable American comics characters such as Superman – that was one of Polke’s signature devices.  Polke, along with American artist David Salle, moved the use of comics and other iconic pop signifiers beyond the simple appropriation and recontextualization of Warhol and Lichtenstein to create dialectical works.  Polke and Salle constructed multi-layered – indeed, in some cases dividing the surface in ways that were clearly indebted to comics panels – canvases upon which a variety of historical and contemporary approaches to painting interact with viewers’ received interpretations of instantly recognizable iconic figurations to create a dialectical tension that the viewer of the work must then resolve in a personally meaningful synthesis.  In New School and 3 New Stories, Shaw has, in turn, taken this dialectic and incorporated it into his mimesis (towards this end he has created a bold, clean black line for immediate comprehensible representation of the figuration to facilitate interaction with the color layers) to variously buttress, modulate and ironize the diegesis, and so effectively demonstrate the capacity of comics to successfully reabsorb and integrate inherent formal aspects that had been exported to fine arts and further developed there.

This purposeful leveling of the high/low, fine/popular distinction in  the arts has a specific aim in reinforcing the “message” encoded within the narrative.  The basics of the story we are given in New School are about as old school as you can get, centering on two brothers, each sent by their father on a quest to a faraway land.  The brothers, Daniel and Luke, are each given names with strong biblical associations.  The latter, however,  additionally references the modern mythology of Star Wars.  This dual reference serves as a key opening the door to New School’s narrative strategy.  This is further elaborated early on when several of Daniel’s prophesies, which, despite being presented, along with many other of Daniel’s utterances, in such a way as to clearly evoke a Biblical air – most notably in the employment of Gothic fonts and phrases such as “possess me, spirit" and “It is good” –  are concerned with a foreknowledge of details relating to upcoming blockbuster Hollywood films rather than any historical event, serving to both conflate fiction (film) and history and link the revealed religion of the ancient past to cinematic revelations of the present.


These serial flattenings of the distinctions between ancient traditions and mass entertainments are unified in the central narrative of New School.  Superficially a simple straightforward story of the natural conflicts played out between two brothers as one enters tentatively into an independent adulthood leaving the other trapped in adolescence, suspended between his loyalty to his parents and to his older brother, it becomes, through Shaw’s placing of this basic formula within the complex web of signification strategies detailed above, a manifesto for a new school of thought-in-comics.  Through the process of being raised within a specific society, we "see" and "read" our own lives as paralleling and reenacting archetypes (folk, mythical, biblical, etc., which are in turn endlessly recycled in popular entertainments, including movies, television serials, and, of course, comics) that we receive from various sources, each of which is implicitly coded with a weight and a rank by virtue of its place of origin, a place that can exist in the mind as much as in physical space.  In New School, Shaw follows Borges in questioning the distinctions between fiction and history,  but goes further, equating the personal and the historical (here following Frank Santoro in Blast Furnace Funnies), locating the political in the familial, and asserting the masses as the ultimate source of the cultural, and so postulates a placeless sense of space, neither here nor there, but everywhere, all the time; an act very much in keeping with our hyperconnected information age.


The central setting of New School is the mysterious island of “X” – which is X-shaped as well as named, conflating signifier and signified and firmly placing the idea of intersection at the heart of the work’s mimesis and diegesis.  Shaw pounds this point even further by making X the home of the theme park and central metaphor of New School, “Clockworld.”  Here in Clockworld, the nexus of the narrative and the locus of the brothers’ quests, signifier and signified are collapsed as history is packaged as entertainment and park-goers wander from replicas of the pyramids at Giza to the Roman coliseum, go on rides with names like “Muhammed to Mecca" and “Livingston to Africa”, watch a motorized reenactment of the Kennedy assassination, and otherwise engage in consuming entertainments centering on historical figures ranging from Gandhi to Napoleon.  The presentation of history as a consumer good to serve as a signifier for the post-modern condition is not a new idea, of course, but by contextualizing these artificial histories within a confabulated land, Shaw forefronts the fictions that inhere to all histories, even personal ones, and asks us to understand that  life is what we make it:  all is constructed.

Anyone ready to dive right in can take a look at this 18 page PDF preview, right now.