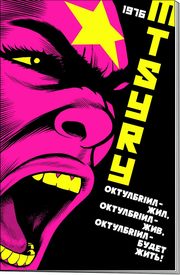 Communism has, in the United States, served as a black mirror of Capitalism (and, yes, this mirror functioned vice versa, as well).  It is onto communism that capitalism’s fears of its own unseen weaknesses, failures and flaws have, historically, been projected.  With the collapse of the Soviet Union in 1991, and the “victory” of capitalism, this mirror was put away up in the attic, where it has been gathering dust.  Without it, the USA has to a significant degree lost its ability to see itself, and understand its subsequent transformations.  But the USSR has not been forgotten!  Here, in the pages of Mtsyry: Octobriana 1976 Jim Rugg has dragged this mirror back down into the present, dusted it off, polished it up and put it on display – in dazzling, fluorescent, “black light” colors, no less.

The action in Octobriana is putatively taking place in the USSR of 1976, but, as represented, it is clearly a portrait of USA today, with Robot Stalin as the CEO of a nation state in thrall to the (obviously male-dominated) corporation.  The opposition group – the PPP – is, again, not a group organized to foment a political uprising, as it would be in the USSR, in classical communist revolutionary fashion, but rather one intent on taking cultural action and fomenting a cultural change, one that clearly provides significant space and roles for women and that is visually presented to align it with the branch of comics originating with Love and Rockets, that is rooted in punk and post-punk youth culture of the USA.

That is the reality from which Octobriana then emerges, a (possibly drug-inspired) fever day-dream of comic book violence set in the USSR that serves as a cathartic battle for the soul of the USA.  Rugg follows the original iterations of Octobriana (see below), which, in her visual representations, went all over the map, and could, in the variety of her depictions, be read as being, wholly or partially, Slavic, Mongolian, Viking and/or Amazonian in origin.  Here in the context of an American comic book this translates to her character being read as a mix of American ethnicities, with African American and American Indian clearly among them.  In this way, Octobriana as comic book mythography, strongly represents a multi-cultural, melting-pot vision of America struggling to destroy the white-male controlled, corporate-centric techno-state represented by the figure of her nemesis, Robot Stalin.  And it is this struggle that the bulk (21 of its 28 pages, if you’re counting) of Mtsyry: Octobriana 1976 is occupied with.

Rugg employs the staple action/adventure trope of Girls With Guns, which, in their conflation of sex and violence, serve as the hormonal hook to reel in the (mostly male) readers of many a comic book.  However, here in these pages this trope is manifested in the form of one woman with many guns… and knives, and, for good measure, a military tank, as well.  Rugg’s pyrotechnical drafting abilities are on full display in these 21 pages of eye-popping action and violent mayhem centered on Octobriana.

And in employing a fluorescent “black light’ color scheme throughout (evidently a first for comics) Octobriana evokes not just the hedonism of the 1960s & 70s, but also, unavoidably, the social and political upheavals that went along with them, and can thereby serve to reflect our own times as well, where we have become used to hearing, “not since the protests of the 1960s has America faced this level of social unrest.”  Intriguingly, Russia has been implicated in inciting our current social unrest, as the Soviet Union was during the 1960s, which dovetails nicely – if somewhat  ironically – with the other narrative layers.

But, “Hey,” you may ask, “Who is Octobriana, and where did she come from?”  Octobriana has a labyrinthine history that has been deliberately shrouded in mystery, but is, ultimately, primarily the creation of Petr Sadecky, who, for the purposes of this review, can be seen as someone aspiring to be a sort of Czech Stan Lee (but one lacking the immersion in and access to popular culture which Lee possessed).  Sadecky collaborated with two Czech artists, Bohumil Konecny and Zdenek Burian, who created the visual designs and a narrative comics template for the character, but then went on to employ these  as the starting point for an elaborate, multi-layered – and deceptively manipulated – mythography of his own making.  Rugg sources his primary visual representation of Octobriana from the cover image of Sadecky’s book in which he lays out the mythology of Octobriana and the story of her creation (which, it turns out, is as much of myth as the character herself), and also references other depictions of her character by Konecny and Burian.  To set the mood, the back cover of Mtsyry: Octobriana 1976 presents snippets of Octobriana's creation myth.  And, finally, there is an Octobriana rabbit hole of significant size available to dive down into, for anyone who is so inclined, but be forewarned that it takes some real digging to go deep.  Two entry points are here and here.  And, you can get Jim's perspectives on Octobriana – and much more – in this recent TCJ interview, here.

Temporarily (we hope!) out of stock.  Please check back...

This item belongs to the categories: Copacetic Select, Made in Pittsburgh, standard pamphlet comic book
You may also enjoy these related titles: