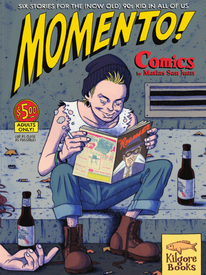 The hype line at the top of this comic book lays it right out: "stories for the (now old) 90s kid in all of us."  Anyone pining for another shot of those finely crafted, pen & ink comics that probe the youth counter culture while prodding society's underbelly and occasionally broaching taboo subjects will find six doses here in the 34 pages of Momento!   Fans of the early Clowes in particular (which is actually from the '80s) will find their buttons being pushed here in stories like "Barry! My Imaginary Friend" and "Night of the Roamer".  The heavy satire of "Bitrilin's Dream" and "A Hungry Artist" may put readers in mind of the repressed anger of the first few issues of Ivan Brunetti's Schizo.  As the issue comes to a close, things veer towards the Peter Bagge worldview, becoming increasingly cynical and jaded in the encroaching darkness of "Switcheroo" and the finale, "The World Passed You By."   All of this is not to say, however, that the comics here are lacking in originality.  San Juan certainly has his own personal vision -- hey, he lives and works in Buenos Aires, so he is definitely drawing on different life experiences than the aforementioned americanos del Norte -- and in Momento! it springs upon those us who are encountering it here for the first time already fully formed.  Thanks should go out to the fine folks at Kilgore for bringing these fine comics across the equator!